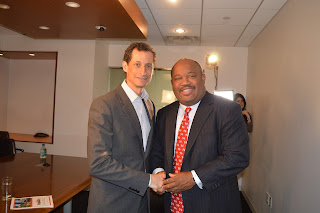 In my opinion, it was a very smart political move by Anthony Weiner to “test the waters” for a possible campaign for mayor.

First of all, I think Weiner has already decided he’s running for mayor, but what I’m referring to is that during his set of local TV interviews Wednesday, when I pressed him for RNN-TV, Weiner didn’t deny that there could be other photos out there. (Here’s part one of the interview.)

“If reporters want to go try to find more, I can’t say that they’re not going to be able to find another picture, or find another … person who may want to come out on their own, but I’m not going to contribute to that. The basics of the story are not gonna change.” Anthony Weiner

Yes, it sounds like a very dangerous Gary Hart challenge, but as the journalist that was sitting just feet away from Weiner and observing his entire body language, his every move, I really felt that he was trying to prove that he has learned a difficult lesson from his past errors. In other words, he told the truth. It seems that Weiner has learned, it’s always the cover-up that finishes you off.

Here is the question I asked Weiner that prompted the response, and you can see it here:

“Is this scandal over? Might there be something else to come out that we don’t know about? Some face-to-face meetings (with the women involved) or anything like that.”

With his head shaking back and forth, Weiner then responded this way:

“I never met the women that were at the other end of these anonymous conversations, but I can tell you this, I didn’t sell pictures to TMZ. [Weiner laughs] I didn’t go do interviews. These women at the other end of these conversations, many of them had their lives turned upside down, and they had no choice to do so. I’m not going to participate in that anymore. If reporters want to go and try to find more, I can’t say they not going to find another picture, another person that wants to come out on their own, but I’m going to contribute to that. The basics of the story are not going to change. It’s behind me. It was a huge mistake.” Anthony Weiner
I have been covering politics for close to 30 years.

In my opinion, Weiner came across as truly sorry, and contrite.

Weiner did not try to see any questions in advance or to set any rules.

By handling the interview the way he did, should an additional photo surface once the Weiner train for mayor gets underway, this time he may not be completely derailed. Depending on what may be “out there,” a setback, yes, but not campaign ending.

Dismiss Weiner at your own peril.

There will be the initial “hit” from the tabloids should he run, but once the race gets going, Weiner has a track record of almost stealing the show in debates with his witty one-liners on protecting the middle class.

I have experience with him in that area, having moderated a four-way debate among Democrats running for mayor in 2005. Weiner did so well, he made it to the run-off, but then pulled out of the race in the name of party unity for the city to elect its first Latino mayor. (In the end, it just wasn’t meant to be for Fernando Ferrer. He lost to Bloomberg; Bloomberg was then completing his first term as mayor.)

So in a crowded field, Weiner could stand out again, and let’s not forget his campaign warchest that is backing him up (more than four million dollars in the bank, and he will also receive some matching fund with the city’s campaign finance system).

I state again, dismiss Weiner at your own Peril