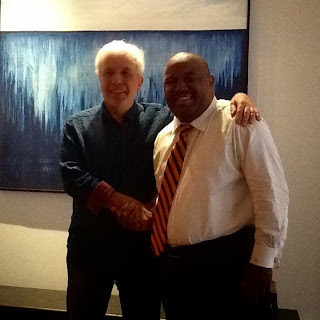 Had a great lunch visiting my man MARK GREEN today at his place- The Former Candidate for NYC Mayor and Public Advocate.Remember the 2001 Race?Mark was a heartbeat from becoming mayor and then 9/11 occurred.The September 11, 2001 terrorist attacks happened on the morning of the Democratic primary, which ended up being postponed and contributed to Green’s loss.Green went on to lose to Michael Bloomberg  50% – 48%, and Bloomberg spent an unprecedented $74 million dollars.Mark I miss our years together doing the NY1 Wiseguys.It was always 2 against 1, and man did you hold your own.  You against two giants- Former Mayor Ed Koch, and Former Senator Al D’Amato. Every week, on Live TV.What’s remarkable is that Green is not bitter at all.  I greatly look forward to reading his upcoming book.

Mark it was also nice seeing your beautiful and lovely wife Deni. Only thing that was missing were you kids,  Jonah, and Jenya.  I can’t believe they are both grown adults. Jenya, with her own family.