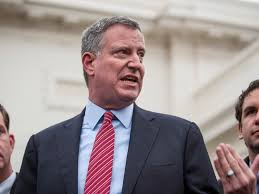 Mr. Mayor, you worked extremely hard to escape from a crowded field of accomplished Democrats to win the nomination and City Hall. To go from a distant third place to the top over Christine Quinn and Bill Thompson.
Respectfully, as of late, what is going on Mr. Mayor, and who in the world is advising you?
Point one.  You need a new press secretary. Karen Hinton may have been good with her time with Gov. Cuomo, but with you lately its one step forward, and three steps backward for the administration.
You are in quicksand, and the media is having a field day.
I’m not going to harp on the fact that in just the last few days, you were on the cover of  both NY tabloids for separate negative stories.On the same day.
Mr. Mayor, you know that in politics, perception becomes reality.
Of course, city residents want their mayor to unwind from all the pressure a mayor faces, by unwinding.
In your case, going to the gym, BUT Mr. Mayor while there is a police stand-off in Staten Island, and one firefighter has already been shot.
Borrow a page from Giuliani.
Do you think Giuliani would be at the gym while all of this was occurring, or do you think Giuliani would be at a police command post updating the public?
Mr. Mayor, things are so bad, you already know an increasing amount of elected officials are talking about your replacement.  That they believe you may end up being a one-term mayor.
And that’s coming from fellow Democrats.  Warning….Warning…