Use of Rev. Wright Would Be a Disaster, but Not Necessarily for Obama 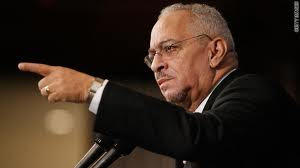 Be careful what you wish for.

Or what your powerful supporters might have possibly wanted.

It was quite smart for Mitt Romney to quickly distance himself from the proposed idea that a supportive Super PAC of his considered bringing back of all issues, the Rev. Jeremiah Wright.

Romney told assembled reporters Thursday that he wanted to “make it very clear I repudiate that effort.”

“I think it’s the wrong course for a PAC or a campaign.”

“I hope that our campaigns can respectively be about the future, and about issues and about a vision for America.”

Even officials at the Ending Spending Action Fund and the billionaire businessman who would have funded the ad campaign denounced the proposed plan and said it hadn’t received approval.

Every campaign decision must be weighed and calculated for political benefit, and of course its liability. (Consultants, after all, are paid millions for this.) Would this move to bring back Rev. Wright please conservatives on the far right? As Sarah Palin might say: You Betcha!

Of course it would. (Include in that crowd those that question the legitimacy of this president, and perhaps even those that play into the birther issue) Hasn’t the country collectively said been there, done that?

“The world is about to see Jeremiah Wright and understand his influence on Barack Obama for the first time in a big, attention-arresting way,” read the plan, first revealed by the New York Times.

If you’re running a presidential campaign, do you really want to take the risk of turning off those crucial independent voters in swing states? Can you afford to even take the risk? Juxtapose this with most polling that indicates Americans, while they may not agree with President Obama on some issues, still like the president.

Be careful what you wish for.

To raise this issue could ultimately be doing President Obama a favor. If you don’t buy the argument, go ask former Congressman Rick Lazio from his debate against then first lady Hillary Clinton. I still remember that night from upstate New York in Buffalo. It was the beginning of the end for Lazio. In the debate, he walked from his podium over to Clinton’s, with a paper asking her to refuse “soft money,” and “demanded that she sign it.” Of course she didn’t, and women voters didn’t take too well to Lazio’s antic. The rest of the story as we all know is history, with Clinton being elected to the U.S. Senate twice, and now serving as Secretary of State.

Let’s face it. The million dollar question that could tilt the election either way is whether Obama’s base will turn out again. Listen to this carefully. Using Wright, a polarizing figure as he is, would guarantee a high African American turnout. And guess who these voters are supporting?

The real fear for team Obama is that some in the base have become complacent this time around or disillusioned with the political process. For the last few years, this has been one of the major discussions in African American forums like beauty salons and barber shops all across America. Naturally people discuss what they like about this president, and privately (because they want to want him to succeed) what they don’t like. You can see right here how we discussed the “Wright” issue on RNN-TV, “The Richard French Live,” Show.

Why would Romney want to get in the way of a potential real problem? Romney could, in effect, be throwing Obama a lifeline.

With the use of Wright, Obama’s base would have a reason to get angry, have motivation to energize, and most importantly, while they may not be fully happy with Obama, it would give them a strong reason to vote. They would view Wright as nothing less than a bad play of the race card. Guess which candidate they would blame, and which one they would rally around in strong numbers?

If the Wright card is played, African Americans would take as much pride in voting for Obama again, as they did in supporting America’s first black president in the first place.

The economy — while it cuts both ways — is a winning issue. Jeremiah Wright is not.