Trump will be the Nominee, Don’t Write Him Off during Fall Campaign 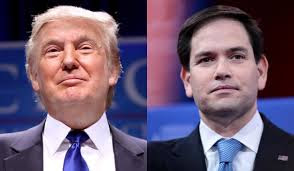 Let the Fall General Election Campaign begin. Months in advance, it is time to deal with the Political reality.
Yes it is inevitable that Donald Trump is the Republican Nominee.   Something that does not sit well with many of my close friends.(A point I made on Verizon FiOS TV)
Folks that don’t like Trump, or that don’t want to deal with the political handwriting on the wall, (perhaps even my buddies) will say how can I proclaim such a thing?  One this is not a bias in favor of Trump.  It’s simply calling things the way they are. Trump has won New Hampshire, South Carolina, Nevada, and the calendar is headed to his strong suit, which is the South, and the upcoming SEC primary where 12 states are at play on the same day, March 1st. (and a few bell weather states as well)

Trump couldn’t have better timing than if he came up with the primary schedule himself.
One potential solution?

Even if the Republican Party rallied around Florida Senator Marco Rubio with establishment money and continued establishment endorsements, as we are witnessing, that won’t even be enough to take the nomination away from Trump.  It’s too late to stop the Trump momentum. The Washington Post put it this way:

Rubio inherits establishment support but is on a narrow path to stop Trump.

Don’t cry for Rubio.  The Florida Senator may not be sent home, not just yet.
A Trump/Rubio ticket would be a game changer.
Such a  Republican ticket would be very tough for the Democrats to beat, and would shatter the argument that Latinos will not support Trump.  Even if Rubio is NOT on the ticket, there is the open race for Florida Governor ahead for him so Rubio will land on his feet, with nothing but a promising future ahead of him.
Hillary Clinton is also the Democratic nominee.  Vermont Senator Bernie Sanders fought the good fight.  He also proved the argument that a tough primary might be beneficial to Hillary Clinton, and that It might make her a better candidate for the Fall Race.
Let the games begin.