Trump Does It Again, Winning Nevada 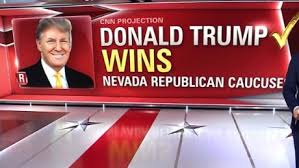 As soon as the Nevada caucus sites closed, the race was called immediately for Donald Trump….for the third time in a row.

Polling in Nevada is notoriously unpredictable, but this time it was dead on, predicting a big win for Trump.

Does Trump go into Ted Cruz home backyard of Texas and win the state?Does Trump pull Ohio from the State’s own popular Ohio Governor John Kasich?

The Republican Candidates debate Thursday in Houston, but the race is over, Trump is the nominee. Senator Marcio Rubio is doing better now as the so-called establishment candidate, but he won’t catch Trump.