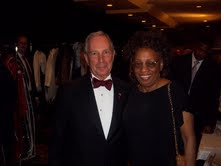 Had a beautiful, great time this weekend at the Inner Circle Show. The show was a hit on, and off the stage. The packed house meant more proceeds for the dozens of charities helped by the benefit performances. Mayor Bloomberg for his part, was joined by stars Nick Jonas, Beau Bridges and other cast members of “How to Succeed in Business without Really Trying.” In this photo is my Aunt Inez with the Mayor. She raised me, and is 66 years young.

I thank all my fellow Inner Circle Members for the love that was thrown my way. I thank you from the bottom of my heart, and for Friday night’s crowd, the round of applause when I walked up to the mike. I was so touched that backstage, I started crying. I thought no one had witnessed this as I hid in-between customes, make-up, and anything else I could find. However how could you get away from 100 journalists? David Diaz who was in the skit with me, told me the next night he saw the tears, but quickly added It was ok. I look forward to next year.

To Watch him on RNN-TV/Fios, The Richard French Show, Mon-Friday at 6:00 p.m. Reaches 8 million households in N.Y.C, Long Island and Albany area. N.J, C.T, DE, and Penn (Philadelphia)Channels are below.