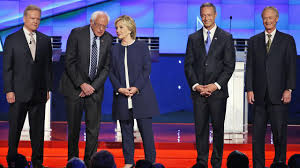 At the first Democratic debate last night, it was a solid performance for Hillary Clinton.

She rejected the charge of political expediency when it comes to changing positions.

Clinton at one point said: “I’m a progressive who likes to get things done.”

The Democratic front-runner needed to hit the re-set button with voters, and appeared to have achieved that goal.

Hillary didn’t seek to run out the clock in the two hour debate, and in fact was aggressive in going after Bernie Sanders on gun control, and a number of issues. At another point telling Sanders:

“We are not Denmark.” Mrs. Clinton said, adding with a sly smile, “I love Denmark.  We are the United States of America.”

The crowd erupted in applause.

Hillary Clinton gave a strong answer on the email controversy that has dogged her campaign, and scored points minutes later with the crowd when she was asked if she wanted to follow-up with another comment, and said no.

It was interesting that Sanders still gave Clinton a life-line on the emails, criticizing all the scrutiny on the subject.

“The American people are sick and tired of hearing about your damn emails.” Sanders said.

The audience enjoyed that moment as well.

Strong night for Hillary Clinton, maybe enough for Joe Biden to stay on the sidelines.