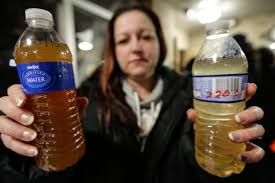 Perhaps the best way to answer the question of should Michigan Governor Richard Snyder be forced to go, is to put this assertion on the table.

If the toxic water situation in Flint does not rise to point out sheer incompetence, and  possibly criminal liability,  then what does?

An interviewer, Mika Brzezinski, of Morning Joe, cited a New York Times article that asked, “If Flint were rich and mostly white, would Michigan’s state government have responded more quickly and aggressively to complaints about its lead-polluted water?”
Many Flint residents, and Democratic politicians including Hillary Clinton and Flint’s mayor, Karen Weaver, have said the answer is yes.
Gov. Snyder does acknowledge failures on the state’s part, as he told “Morning Joe.”

“If you look at it, it was people being much too technical, not having the culture of asking the common-sense questions, and then the tone of how things were done,” he said.

But where was the governor, or his state appointed manager of Flint’s water. Instead of saving money, they have created a health crisis where the full impact will not be known for years.   The Gov promises to fix the problem now, however the state downplayed and largely ignored the immediate complaints about the smell, color, and taste of the water going back to 2014.

“The department people weren’t, the heads were not being given the right information by the quote-unquote experts,” he said. “And I use that word with great trial and tribulation because they were considered experts in terms of their background. These are career civil servants. They had strong science, medical backgrounds in terms of their research. But as a practical matter, when you look at it today and you look at their conclusions, I wouldn’t call them experts anymore.”

This governor has completely lost the confidence of the public.
Bottom line,  the governor needs to go.

This is a comment I received from David Thomas on Linkedin.  Perhaps it best summarizes the situation.

“Bottom line, water, one of our most precious resources was compromised. The fact that once there were complaints about the water and nothing was done about it right away, speaks volumes. The harm inflicted on another one of our most precious resources, children, speaks to the careless attitude of the powers that be in Flint. Multiple heads should roll. We are talking about thousands harmed because of this. Outrageous!”  David Thomas – Linked In Comment