Sharpton on South Carolina, and candidly reveals fears of his own safety 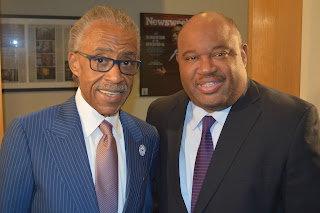 In light of the situation in South Carolina, Dominic Carter went one-on-one with the Rev. Al Sharpton, and Sharpton admits he has added concerns about his own safety. here is the TV segment.

“Every Morning, I know that there are people in America that wish I didn’t wake up.” (Rev. Al Sharpton)

“Anybody that walks up to me could be asking to shake my hand, asking to take a picture, or trying to blow my brains out, and I know that because it happened to me when a man stuck a knife in my chest.” (Rev. Al Sharpton)

Dominic Carter:  “Why Rev. Sharpton is your voice cracking?”

“Because I don’t think people understand that I like anybody, want to see my children grow and be prosperious. I don’t have a death wish.” (Rev. Al Sharpton

Sharpton was also critical of the Secret Service Protection of President Obama.

The full Sharpton interview airs Thursday night at 6 pm. on Verizon FiOS News/RNN TV.  You can go to this link, and put in your zip code to find the channel in your area.

Or if you are not in the New York Tri-State area, you can watch the interview live online at this link.