Rudy being Rudy on Obama Patriotism 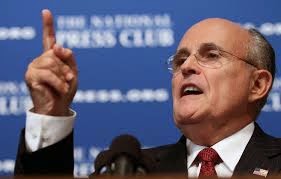 It seems like he is finally back-tracking, but America, meet the Rudy Giuliani that New Yorkers were all too familiar with. You may have noticed his standard method operandi is only one way, and that is to relentlessly attack some more.
Granted, former elected officials try to stay relevant when they leave office, and to stay in the public eye, this means from time-to-time engaging in political theatrics on television with inflammatory comments. Democrats do it, Republicans do it, Independents do it.
If ever there was a case to illustrate this point, look at the actions of this one-time failed presidential candidate. I know Giuliani well, having moderated live TV shows with him, and shared personal and private time with him in the basement City Hall apartment for NY’s Chief Executive, but “America’s Mayor,” broadside against President Obama is giving new meaning to the term attack-mode.
What make matters worse. Giuliani said Obama has been under Communist influence since age 9.
Then in classic Giuliani form, there was more, as he told CNN.
“There’s a real attempt to make it a racial criticism. It has nothing to do with race,” Giuliani said, pointing out that “he was brought up by the way by a white mother and white grandparents.”
Rudy is a workaholic, but maybe its time for a vacation.
This all started at a New York dinner for Wisconsin Gov. Scott Walker, a potential GOP presidential contender, Mr. Giuliani said Wednesday night that the Democratic president does not “love America.”
“He doesn’t love you. And he doesn’t love me. He wasn’t brought up the way you were brought up and I was brought up through love of this country,” Mr. Giuliani said.
Just weeks ago, nationally, Giuliani also found himself on the defensive when he took on the issue of “Black on Black Crime. It is this writer’s strong opinion, on that occasion, political correctness may not have been in his corner, but Giuliani was correct with his assessment. This time I ask you. Did he go too far?
Democrats charged Rudy was playing the Race Card.
Mr. Giuliani told several media outlets, that, in his opinion, “as an American citizen, that our president does not emphasize enough his love of America. He emphasizes his criticisms of America, which has created an impression that he doesn’t love America enough—I don’t mean that as a psychological analysis.” Giuliani said.
The chairwoman of the Democratic National Committee, Debbie Wasserman Schultz,dismissed Mr. Giuliani and tried to tie him to the rest of the 2016 Republican presidential field.
Investigative Journalist Wayne Barrett stated in a NY Daily News Column, “What Rudy know about Love,” that severely attacked Giuliani’s personal life.
As far as the President’s heritage, his grandfather served in World War II while his grandmother worked on a B-29 assembly line.
As a journalist that closely covered Giuliani’s tenure in New York, Giuliani’s flare for not backing down, and speaking out was often refreshing for those of us that covered him. This is the same mayor that in a State of the City Address, on the second floor of City Hall that vowed in frustration that the Board of Education should be in his direct words: “blown up.”
I call this: “Rudy being Rudy.”
Let’s not forget, Giuliani as mayor of NY was highly polarizing, though he did clean the city up. Giuliani goes in attack-mode, full throttle….
and this time…. he was not winning in the court of public opinion.
I too, join you Giuliani as millions of Americans do, in wishing President Obama would use the term “Muslim Terrorists,” but to question Obama’s patriotism was a low blow.
And Maybe, just maybe Rudy is getting the message.
This is what Giuliani has said Sunday in a Wall Street Journal op-ed:
“My blunt language suggesting that the president doesn’t love America notwithstanding, I didn’t intend to question President Obama’s motives or the content of his heart,” Giuliani said.
“My intended focus really was the effect his words and his actions have on the morale of the country, and how that effect may damage his performance.” Giuliani said.