Rubio Emerges At the Top….For Now 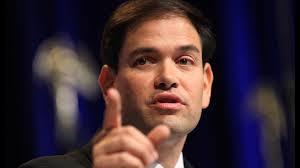 It was a great week for Presidential Candidate Marco Rubio.
The Florida Senator has just entered the contest, and presto, not only has he jumped to the head of the republican field, a new poll shows Rubio runs best against Hillary Clinton among all Republican 2016 Contenders. The national Poll from Quinnipiac Univeristy shows Clinton ahead of all Republican challengers, but when it comes to Rubio, she leads him by a narrow 45 percent to 43 percent—within the margin of error.
This new found momentum will help Rubio pull in money, and perhaps is an early embarrassment to former Florida Governor Jeb Bush.
However this poll news means really nothing because we have been here before, and history proves the poll may not mean much ultimately.
Remember the last Republican Primary. (2012) Nearly all the contenders shot to the top of the polls, only to quickly falter and drop out, one by one.
Even Pizza Guy Herman Cain went to the top of the polls at one point. (with noconstituency)
Remember Rep. Michele Bachmann (R-Minn.) was gaining ground.
Also Texas Governor Rick Perry? Dare we bring back his performance on the stump in New Hampshire, and during a live debate, forgetting what federal agency, he would permanently shut down. Perry quickly went away.
So Mr. Rubio, enjoy the moment, but it will not last. Our Panel on Verizon FiOS News/RNN TV agreed.

It is possible that after Obama, Republicans could be looking to reclaim the White House by putting Rubio in the number two spot on their ticket.