Perry error may have ended his campaign tonight, Cheers for Herman Cain 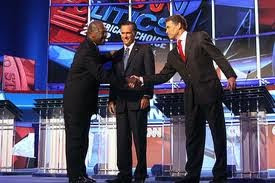 Perry can’t win for losing. When stating he would eliminate 3 federal agencies, before a national audience tonight, Perry couldn’t remember the third. He cited commerce, education, and repeatedly could not remember the third agency he would do away with.

Finally, another candidate said EPA. Perry repeated EPA, and then said no, that’s not his 3rd agency he would eliminate. Press will have a field day with this one.

Perry, the current governor of Texas has been exposed as not being ready for prime time.

An almost triumphant Herman Cain emerged at Wednesday night’s Republican presidential debate, saying that voters “deserve better” than the kind of sexual harassment allegations that have ensnared his campaign.

Cain drew wild cheers at a CNBC debate upon defending himself from a series of sexual harassment allegations that have emerged against him in the last week and a half.

“The American people deserve better than someone being tried in the court of public opinion based on unfounded accusations,” he said in the early moments of the debate. “This country’s looking for leadership, and this is why a lot of people, despite what has happened over the last nine days … the voters have voted with their dollars, and they are saying we they don’t care about character assasination — they care about leadership and getting this economy gooing and all the other problems that we face.”

But amid talk of his treatment of women, Cain drew some gasps — and applause — later during a discussion of health care, when he referred to former House Speaker Nancy Pelosi (D) as “Princess Nancy.”

He seemed, though, to get a pass from former Massachusetts Gov. Mitt Romney, with whom Cain is jockeying for the top spot in primary polls.

“Herman Cain is the person to respond to these questions — he just did to the people in this room and accross the country,” Romney said when asked if he was satisfied by Cain’s response.

Meanwhile, forget the 9-9-9 plan; Herman Cain might be employing a Top 10 strategy soon.

The embattled Republican presidential nominee will appear as a guest on “Late Show With David Letterman” on Friday, Nov. 18, CBS announced Wednesday.