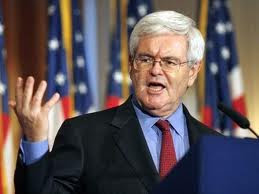 We can laugh at his candidacy all we want too, but the joke may end up being on us. No one predicted Gingrich, with all of his baggage had any shot at winning the Republican Presidential Nomination.

He is a polarizing figure, the womanizing, and Mr. Newt “I’m not a lobbyist as he collected 1.6 million.”

Not only is Gingrich surging in the polls on the Republican side, he has also scored a MAJOR Newspaper endorsement—right in the backyard of Mitt Romney.

Not only has New Hampshire’s largest Newspaper endorsed Gingrich, the backing is important for two other factors. The paper, the Union Leader accurately picked the winner of the 2008 Republican contest with its backing of John McCain, and the paper also takes Romney to task as a flip flopper.

This is yet another example of with their actions, It appears Republican voters just don’t like Romney.

Look at what the paper said yesterday, and keep in mind New Hampshire is the first in the nation primary. For all the candidates it’s about building momentum to lock up the nomination, but it does not look like that will happen anytime soon.

“Newt Gingrich is by no means the perfect candidate,” the paper stated. “But Republican primary voters too often make the mistake of preferring an unattainable ideal to the best candidate who is actually running. . . He has the experience, the leadership qualities and the vision to lead this country in trying times.”

The paper said it was better to go with Gingrich — “someone with whom we may sometimes disagree than one who tells us what he thinks we want to hear.”

Romney still leads in New Hampshire. But if Gingrich doesn’t implode and manages to win conservative Iowa, and then pulls off New Hampshire, it may be impossible to stop Gingrich.

Remember on the Democratic side four years ago. Obama won Iowa, Hillary Clinton broke down and cried, and won New Hampshire, but Obama’s momentum was so strong that it was no stopping him as the race turned to South Carolina.