My Heart is with the People of Israel 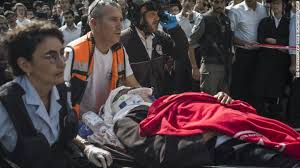 If it is not the stabbings, the situation is this, according to the latest headlines:

“Two Arab attackers opened fire in a bus station in southern Israel on Sunday, wounding five people, one critically, in one of the boldest attacks yet of a month-long wave of violence.”

One’s heart has to go out to the people of Israel. The unrest has an entire country on edge, with the world closely watching.
I for one, with never forget the carnage from nearly twenty years ago, the bombings in Israel on Bus #18.
In New York, the horrible situation at the time dominated all the local newspapers: two suicide bombers killed 45 people on the bus line.
I had no idea that just days later I would actually find myself there, in Israel, on the same bus #18. The year was 1996, and I was covering then NY mayor Rudy Giuliani who made the trip there in solidarity with the people of Israel.
I remember that among the officials Giuliani met with was Mayor Ehud Olmert of Jerusalem, before Olmert was Prime Minister.
I will never forget how terrified I was, aboard Bus #18.
First, and even though it is absolutely necessary for public safety, I had never seen a military soldier guarding bus stations with heavy artillery. Military Service in Israel is mandatory, and some soldiers are 17 years old. This young lady in uniform looked like she was in High School.
On the actual bus, all I could think about was the “what if.”
What if someone had a bomb on this bus, and planned on making international headlines by assassinating the mayor of NYC.
As the bus rolled along, I actually found myself profiling, and looking at everyone aboard with a greatly suspicious eye. Every face, and in particular looking at every bag.
Also, I will never forget visiting local hospitals in Israel,  talking with innocent victims of suicide bombings, with bandages it seemed everywhere.  Children and the elderly.
My heart is with the people of Israel in such a crisis.