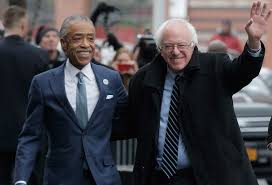 I will let you figure out the Tea Leaves.
Bernie Sanders and Hillary Clinton speak at Rev. Sharpton’s Conference this week and THEN it drops tonight that 3 DAYS BEFORE THE PRIMARY, Sharpton will join Sanders at an event Sat night in Brooklyn. Uh oh Team Clinton. Part of Sanders press release on this is below.