In Their Battle Cuomo 3 – De Blasio 0 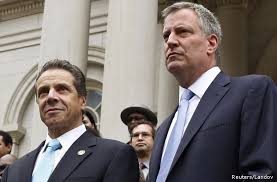 O.K. Historically whenever there is a battle between Mayors of New York, and Governors, its never a fair fight. The heavy advantage always goes to the Governor.

First, mayors must go hat in hand to ask Albany for Budget Money, and perhaps as equally important, Mayor’s must ask Albany for additional powers, which legislators can veto for all sorts of reasons. In other words, mayors must ask for home rule in some areas, so that they have the authority to control local entities.
Perfect example,  the NYC Department of Education, which played a major role in starting this Cuomo/DeBlasio battle. Albany only gave De Blasio control for one year of the NYC Department of Education.

Officially, the state senate got in De Blasio’s way, but then De Blasio publicly accused fellow democrat Cuomo of actually being behind the entire effort to block him..

Memo to NY Mayor Bill Deblasio: Gov. Cuomo is a master politician. He has been around Albany a very long time,  and will continue to outmaneuver you for credit on almost each and every issue.  That was my point on TV Monday night.  You can see the segment below.

Case in point – Have you seen the new Cuomo TV ads that are already up and running, giving the governor credit for delivering the 15 dollar an hour pay for fast food workers.