Homeless: Mayor Deblasio Must Do More 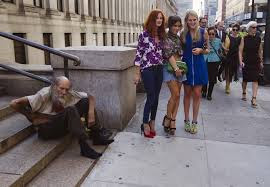 While filling in for Geraldo Rivera on WABC Radio, Monday/Labor Day, one of my topics was the homeless in New York City.
The light board exploded with calls that overwhelmingly said the problem of the Homeless under Mayor Deblasio is getting much worse than in years past, and the demand was so high for focus on Homelessness, that I took calls on it for an entire hour. This is also a piece I just did recently on Verizon FiOS TV regarding the homeless, and the impact on families.
Former Mayor Rudy Giuliani in the NY Post, wrote a page one piece advocating a tough love approach. Giuliani may be a polarizing figure, but his argument seems quite reasonable to me. Here is what Giuliani wrote:

“My analysis of social policy always begins with how I would treat my child, sister, brother or friend if they fell on hard times. Suppose I found someone I loved living on the streets. What would I do? Let him remain there because he wants to and claims some fictitious legal right to do so? Or would I find out what was wrong and intervene, even if a bit of tough love was necessary?

When family members aren’t around or can’t handle the problem, it falls to the government. Under my hypothetical situation, I would find out why he is on the streets. Is he without funds to pay rent? Is he drinking too much or taking drugs or suffering from mental illness? In any one of those situations, I would suggest and then, if necessary, exert pressure on him to get appropriate help. If it’s simply a lack of housing, I would find him a place to live and as soon as possible find him a job so he could regain the self-respect to care for himself and his family.If he is an alcoholic or drug addict or suffers from mental illness, then I would bring him to appropriate programs — many of which have great success in dealing with these afflictions using therapy and medications.Under no circumstances would I leave him an option that does not and should not exist in a loving city — a right to live on the streets.This approach is not hypothetical. As mayor, I utilized it and was able to successfully remove the vast majority of homeless from the streets, providing humane and effective solutions for many of their problems. This should be at the core of a city’s program for the homeless.The plan we followed was simple and effective. We didn’t need a task force to devise it, and it should be utilized now by New York City before we become a homeless haven like we used to be.The police should approach every person attempting to sleep on the sidewalk and tell them they are not allowed to use the streets as a bedroom and toilet. If he only needs a place to stay, that can be provided. If he needs a job, the city should help him find one as my New York City Job Agency did, or if private work can’t be found, he can be required to work for the city for the legal limit of 20 hours a week.”

Giuliani in the NY Post.
Mayor Deblasio appeared on Morning Joe Tuesday, and vowed New York City is not headed in the wrong direction.