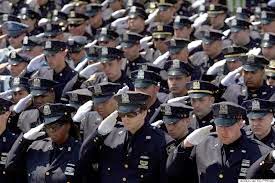 One of my saddest assignments ever as a journalist was to cover Friday’s funeral for 25 year old Police Officer Brian Moore in Seaford Long Island. A young man, again 25 year’s old, who gave his life for a city and a community to keep guns off the streets in Queens.
Tens of Thousands mourned the hero officer, law enforcement officials from around the country. From places like New Jersey, Chicago, Wyoming, and several cities from California.
P.B.A President Pat Lynch, perhaps summed everything up in this interview he did with Verizon FiOS News/Dominic Carter.
Our hearts go out to the NYPD, and to the family of Officer Brian Moore.  His father, and uncle worked in the same capacity for the New York Police Department.
In many respects, Officer Moore was just starting to live his life.  And now, we also have the situation in Mississippi, where two police officers have lost their lives during a traffic stop. Just imagine, their mothers, wives, and family members had to bring in Mother’s Day, with this horrible, horrible news.

Please, thank a law enforcement official when you see one, for all that they do for us.