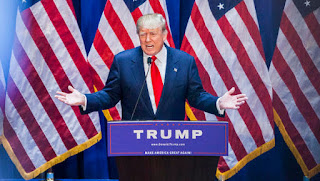 It should come as no surprise that Donald Trump is leading in the polls in Iowa.
First of all, it bears repeating, there is no oxygen left in the room for the other candidates in the crowded republican field. Trump is a dynamic personality. Don’t believe me.  Ask NBC why they gave Trump his own reality show which was a ratings hit.
Second, considering Iowa’s is a conservative state, (candidates considered conservative do very well there, even though Iowa’s demographics do not represent the mainstream of America)
Certainly Trump’s rhetoric as of late, plays to conservatives. (Despite Sen. Rand Paul’s ad to expose Trump as a Democrat)
Granted, some throughout the country may consider Trump’s antics outrageous and demeaning.
Whatever Republicans are going to do, they better act fast, and before the Iowa Caucuses, and New Hampshire primary.
Whether you like him or not, if Trump is on the ballot, and wins Iowa, and New Hampshire, there may be no stopping “The Donald,” to the nomination – . That was the point I argued on TV the other day.
This week, Trump serves Jury Duty.