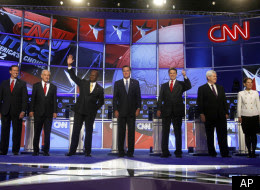 It was the long awaited showdown between Massachusetts Gov. Mitt Romney and Texas Gov. Rick Perry. Finally one of the Presidential debates this year did not put us all to sleep.

Perry who is trailing in the polls and suffering from poor debate performances had to go negative, called Romney a hypocrite, while the former Massachusetts governor retorted that the Texan was suffering from some recent rough debate outings. The body language of both turned visibly cold as they talked past one another at points.

The fireworks came halfway through the first hour of the debate, when Perry accused Romney of having hired illegal immigrants as landscapers at one of his homes.

“The idea that you stand here before us and talk about you’re strong on illegal immigration is on its face the height of hypocrisy,” a more animated Perry said.
Romney denied ever having hired an illegal immigrant and heatedly insisted he have a chance to talk when the two bickered during Romney’s response.

“This has been a tough couple of debates for Rick and I understand that, so you’re going to get testy,” Romney said, later adding: “You have a problem with allowing someone to finish speaking.”

Next up, expect negative campaign commercials to match the debate performance.

However what made Tuesday’s event different from all the others?

Anderson Cooper did a fantastic job of getting out of the way and permitting the candidates to basically handle themselves. Yes, there are always debate rules, but once that light comes on starting the event, the moderator has some discretion as to how to proceed.

The better debates are the ones where the moderator is not insecure enough where they feel they must inject themselves almost non-stop to prove how smart they are. Good debates mandate the candidates go back and forth among each other.

Sure, Cooper may have made a gaffe or two last night. We all do. Like when he asked Congresswoman Bachmann, “you also said at the last debate that everyone should pay something. Does that mean that you would raise taxes on the 47 percent of Americans who currently don’t pay taxes?” What he really meant was the stat that 47% of US households don’t pay federal income taxes. (They do pay other taxes)

In the end, Newt Gingrich proposed going back to a series Of Lincoln Douglas Style Debates, (In other words, no moderator, and just the two major party candidates going back and forth for hours) Well Newt that won’t happen, but Cooper did a solid job last night.

We finally got to see the candidates mix it up a bit, and not be so controlled by a moderator.