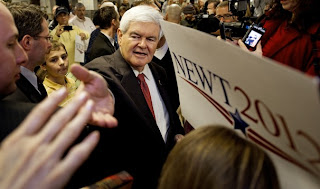 It proved to be an easy victory Saturday in the South Carolina primary, blowing a hole in former Massachusetts governor Mitt Romney’s aura of inevitability.

The result marked a swift and extraordinary turnaround in Gingrich’s fortunes — thanks largely to strong performances in two debates, in which he appealed to the state’s strident conservatism and threw Romney off his stride.

Next stop Florida, and a nasty campaign.