Forget Politics for a Night, Its About Mayweather/Pacquiao 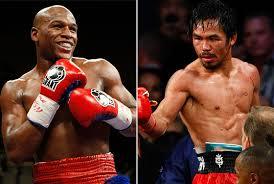 I’m a Muhammad Ali man myself, followed by the fact that I was impressed with, in his heyday, how fast, (literally seconds) Iron Mike Tyson would knock out his opponents. Since then, the heavyweight division and boxing on a whole, has been one big bore. Almost like baseball. It’s there, but it’s not there.
That all changes Saturday night. I have to admit!!!
The fight that almost didn’t happened.
For years if it wasn’t one obstacle, it was another between Floyd Mayweather, Jr. and Manny Pacquiao, but the fight sold out in seconds.
The same night, this Saturday night, I’m nominated for an Emmy Award. I won’t be able to attend that event in mid-town because I’m in Virginia giving a speech to at risk children.
Just my luck the speech is at nighttime, but you better believe that while in Chesapeake, Virginia, my wife Marilyn and I, along with my son Dominic Jr, will find a TV set that is broadcasting Mayweather/Pacquiao.
With this fight, and of course, the likely rematch to follow, this just might be the spark to start to bring boxing back.

Maybe Boxing could be as interesting as Politics.