Ernie Davis in a fight for his political life 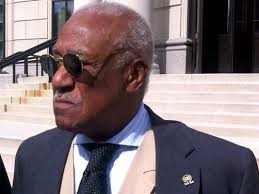 This is from the column of widely regarded and influential columnist Phil Reisman in the Journal News.
The challengers accused each other of incompetence, too, but Davis was the featured lightning rod. At one point, Dominic Carter, the seasoned TV journalist and debate moderator, raised the topic of the mayor’s leadership style.
Each of the candidates took a crack at the question: Was Davis arrogant? Davis had his own answer, which he delivered it in a laid-back drawl that is such a familiar facet of his entertaining persona that it ought to be registered as a trademark.
“I’ve earned the right to be arrogant,” he pronounced.
He told his critics to “get real.”