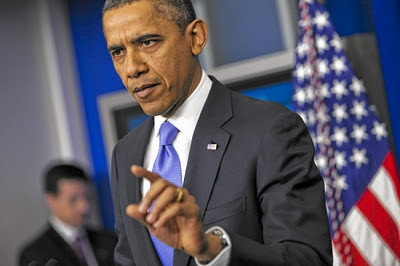 President Obama is firing back at GOP presidential hopefuls who claim he runs a soft foreign policy . His response:

“Ask Osama bin Laden and the 22 out of 30 top Al-Qaeda leaders who have been taken off the field whether I engage in appeasement,” dared Obama during an unscheduled White House news conference Thursday.

Obama used the May slaying of the terrorist mastermind – and the killings of nearly two dozen of his lieutenants – as a rebuttal to the GOP’s questioning of his track record as commander in chief.

He also warned Congress that they wouldn’t be going home for the holidays if they don’t extend an unemployment insurance and a payroll tax for middle-class Americans. The President has also announced that he will not be heading to Hawaii for a family vacation until these initiatives are completed.