Did you say David Dinkins, the Actor? 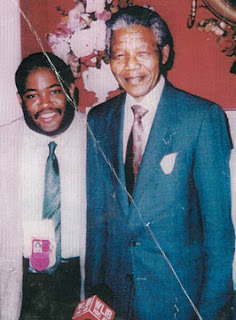 I will remember Saturday Night for a long time.

In honor of Nelson Mandela’s Birthday, which was this past Saturday, I decided to go see the play “Mandela,” and it was the title that intrigued me for several months. The play was at the National Black Theater at 125th, and 5th Ave.

It just couldn’t be, I thought.

David Dinkins, the Former Mayor of New York City?  The giant gracious man that is now in his 80’s?

Yes, it was that David Dinkins.

Well Saturday Night turned out to be a delightful experience that was quite emotional for me.  The play took me all the way back to 1990 when Dinkins was the city’s new mayor, Mandela had just been released from Prison, and Mandela in a historic trip came to New York.

That interview that Mandela gave me during that trip in 1990 changed my life forever. After all I had only been a working journalist for four years at that time.   You can see some of the photos here.

I also thank community activist, and great actor John Ruiz for inviting me.

Ruiz, who is a gentle man, reminded me before the show that he played a horrible prison warden in Mandela’s life, and boy, he was not joking. The play was also written by Ruiz, and Mandela is played by Audelco Award Winner Lloyd Goodman, and sounds just like Mandela.

Mandela is a play that all New York City School Children should be required to see. The actors are just that good.

At the end, the real life scene where Mandela was presented the key to New York City by Mayor Dinkins is reenacted with the real mayor in the play.

It was all remarkable, and well done using technology. 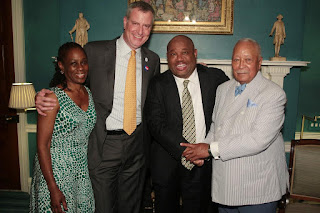