Cuomo wins with his Pension Deal 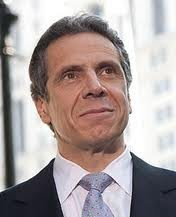 The man is on a roll.

If I told you during the campaign that Governor Andrew Cuomo would have major, unprecedented first-year accomplishments, and then would set the bar high in year two, wouldn’t you ask what was in my coffee? Did I have some type of head injury?

On NY1, Congressman Charles Rangel would joke all the time asking live on TV, if I was drinking that “Giuliani” water? You might ask right now, if I had some of that “Cuomo” Water? (Answer is no, and no.)

However I do have to tell you that Cuomo has done the near impossible. He continues to have a very high favorability rating with voters, but at the same time, and solely because of him, Albany dysfunction seems like a thing of the past. Dare it be said, lawmakers are doing their jobs.

Look at just the news this week out of Albany: seven casinos statewide, expanding the state’s DNA databank, and pension overhaul. Issues that, by the way, are not just a walk in the park and in some states can be a third rail of politics. The fact of the matter is, Cuomo has seized the moment with lawmakers.

Some good government groups argue the pension deal doesn’t go far enough; unions say Cuomo has turned his back on the middle class; but this much is indisputable: something had to give with out-of-control pension costs. (The agreement does not include city cops and firefighters.) Chief executives and mayors of municipalities across the country complain almost in unison about skyrocketing costs.

So here’s the point.

You may believe Cuomo didn’t get enough done on the pension front. You may feel he went way too far. However let’s not forget Cuomo got something accomplished and forced Albany leaders and the legislature to act on it.

The deal only impacts new employees. The retirement age goes up just one year from 62 to 63.

Skeptics may squabble over the math, but the deal is expected to save $80 billion over 30 years, according to the governor’s office. It also increases the contribution rate for those who earn more than $45,000 to between 3.5 percent and 6 percent from 3 percent. Those with an annual salary of less than $45,000 contribute 3 percent. It also reduces the percentage of the final average salary used to calculate annual retirement payments. To put it in Cuomo’s words, as he did in an email:

“Without this critical reform, New Yorkers would have seen significant tax increases, as well as layoffs to teachers, firefighters and police.”

There is no quick fix to addressing rising pension contribution rates driven by the financial market meltdown in 2008-09, but unions tell a different story.

The pension deal was reached as Cuomo threatened lawmakers with a veto over voting district lines redrawn to meet population shifts recognized in the 2010 U.S censes, union officials said.

“Tier VI shoved down the throat of state legislators fixated on their own self-preservation will be devastating to 99 percent of New Yorkers,” Danny Donohue, president of the Civil Service Employees Association, the state’s biggest public-worker union, said in a statement. “This deal is about politicians standing with the 1 percent — the wealthiest New Yorkers — to give them a better break while telling nurses, bus drivers, teachers, secretaries and laborers to put up and shut up.”

Cuomo does make a strong argument when he states pension costs will consume 35 percent of local-government budgets by 2015, up from 3 percent in 2001.

Let’s not forget his first year accomplishments: an on-time budget that cut state spending, the creation of the state’s first property tax cap, a new ethics reform law and the political landmine of legalizing gay marriage.

Cuomo’s already off to a tremendous second-year agenda. He’s bridging the partisan gap, and his political star only seems to keep rising. Is Washington again in his future?