Bratton Talks Crime, Everything Else With Dominic Carter 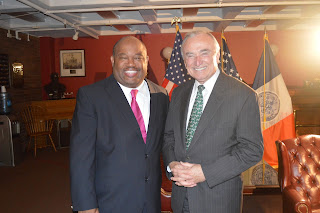 Journalist Dominic Carter went one-on-one with NYC Police Commissioner William Bratton. One topic was the protests against the NYPD.

“what do we want, dead cops…… and what do we end up with….. dead cops. That where the insanity became to much.” Police Commissioner William Bratton

Bratton responded to his comment about it being tough hiring black men for the NYPD,

But Bratton is also bringing in remarkable recruitment changes.
He also talks about what its like when he has to have that horrible, horrible conversation with a family after their loved one has been killed in the line of Duty. Here is part one of the interview, and here is part two.